The Auschwitz Model: The Experience of studying the unimaginable 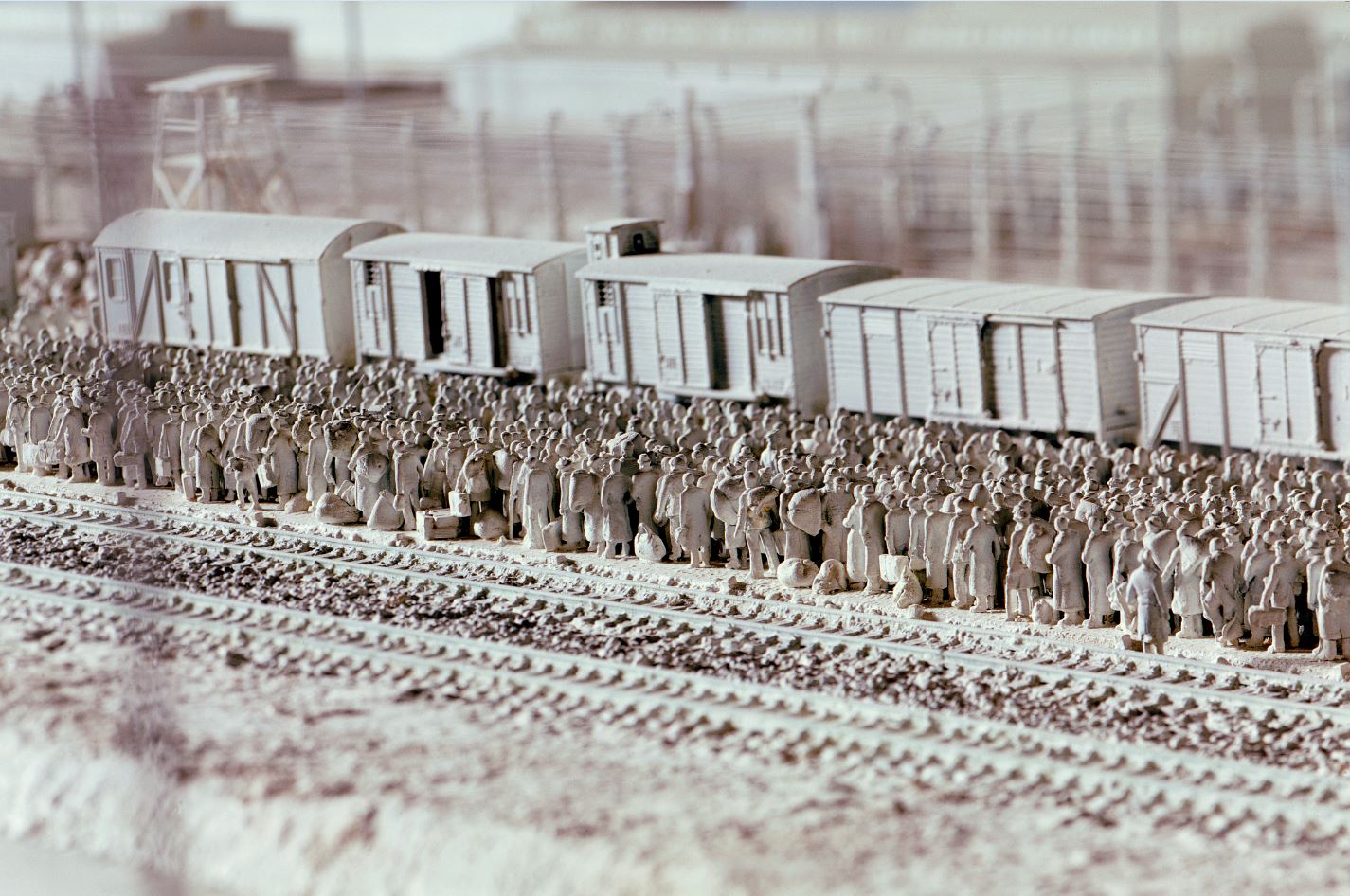 In 1999 the sculptor, artist and designer Gerry Judah asked me to help construct a model portraying a section of the vast Auschwitz concentration camp as it existed in 1944. Although it has been over 20 years since the model was completed I still regard it as perhaps the most important project I have worked on and certainly the one which required the most emotional energy as well as creative skill.

The Imperial War Museum had approached Gerry to create a simple block representation of a crucially important section of the camp for their new Holocaust Gallery. The model was to include the famous watchtower gates through which the railway brought the prisoners, the disembarkation ramp where the prisoners were ‘sorted’, a series of typical accommodation huts and finally the infamous building comprising the gas chamber and crematorium. The boundaries of the model enabled the entire story and purpose of the camp to be laid out in one single tableau, a diorama measuring twelve metres long and three metres wide. 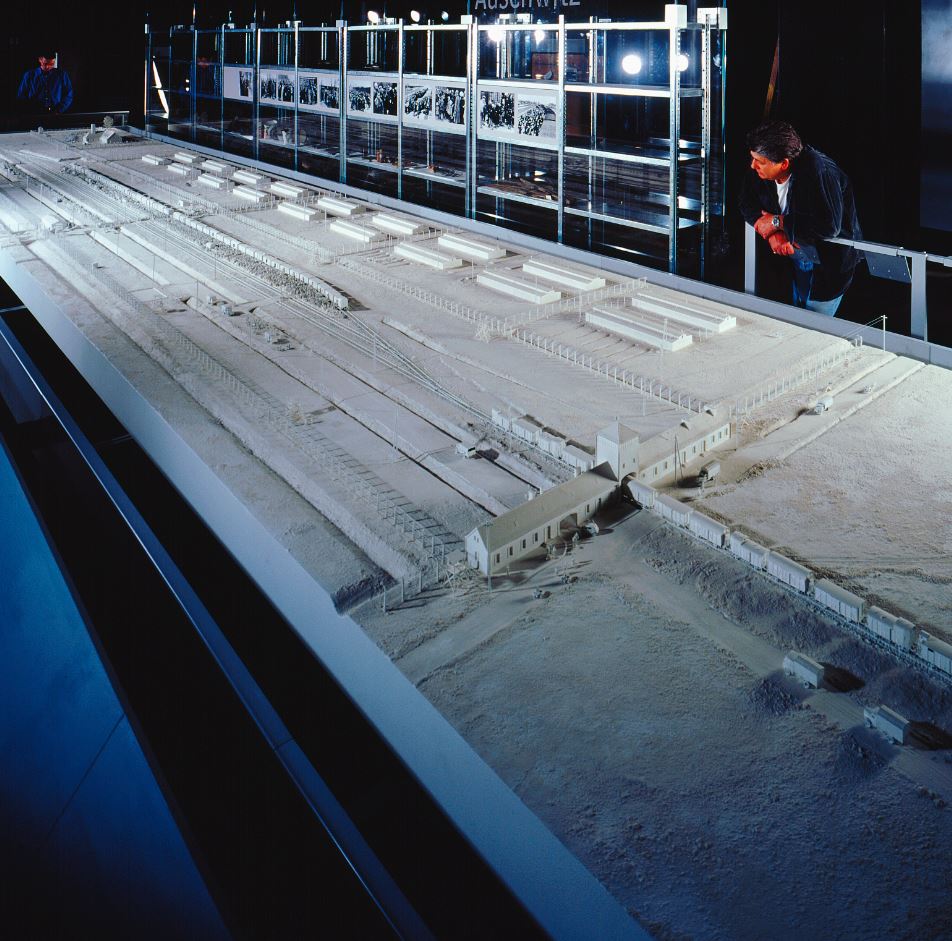 The genius of Gerry’s model design is that it shows each of the various episodes of the experience of the prisoner being simultaneously represented. Time has stood still for each event and the museum visitor sees the train entering the camp, and then the same train on the ramp; prisoners being grouped by sex and fitness to work, and then the same prisoners walking to their place of execution. The IWM were, I think, persuaded by Gerry to change the brief from a simple block model showing positions of buildings to what became a sculpture of cultural significance.

I was commissioned to take charge of the actual construction, the huts and landscape, the tracks, wagons, fences and most importantly of all the 6,000 figures on the model. I worked under Gerry’s supervision with two or three part time assistants in his North London studio for over a year on the project. We used an established model railway scale of 1:87 so that some elements could be adapted from existing model parts. We found that the wagons commercially available were almost an exact match for those used at the time. All vehicles had to be made from scratch, as were the buildings and the enormous amount of barbed wire fencing.

We were supplied by the IWM with a large amount of reference material including plans and diagrams of the camp. Since its liberation the actual site had not been well respected as a historic artefact. Many of the buildings had been demolished and some huts and watchtowers had actually been moved, so current modern photographs proved to be an unreliable source. The most important reference document we had was a reproduction of an album of photographs found by a prisoner called Lilli Jacob. She was among the last to be interned in the closing days of the war and when one morning she awoke to find the camp empty of guards she went searching the barracks for food. She happened to discover a book of photos showing prisoners arriving and being processed. All of the pictures were taken on the same day and the remarkable thing for her was that they showed an arrival at the camp of people that she knew. All were residents of her home area and had come from the Berehovo Ghetto in June 1944.

We studied this album minutely for weeks while I drew up the plans for the model. Each photograph became so well known to us that I began to recognise individuals in different pictures taken during that day’s events. Their faces and clothes, gestures and even the way they stood are images I can still recall. They literally haunted my working day whilst I tried to objectify the images. Which hut are they standing in front of? Where was that telegraph pole in relation to this fence? Where are the shadows falling? If those guards are in the shade of that truck, are they facing the crematorium? 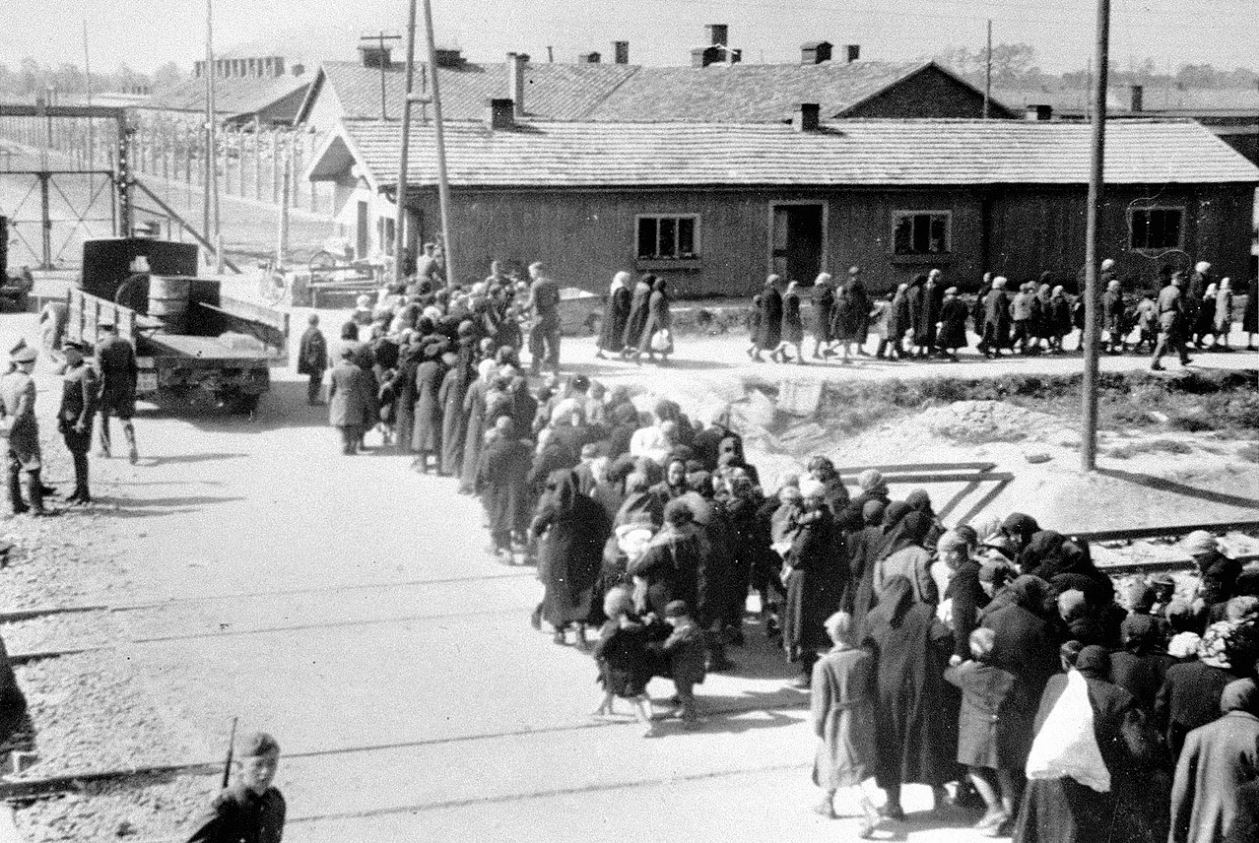 By triangulation of images we began to piece together details which would be vital to populate the model with figures and everything else in the camp. There were many objects we could not make out, even magnifying the images there seemed to be inexplicable ladders standing on paths in the open, or tiny huts in ditches with no apparent purpose. Each of these elements was carefully scaled, drawn and then made in miniature. Throughout this process of recording and planning I found the faces of the people in the photos impossible to ignore. Week after week on the project staring at these pictures gave me an insight which I feel has never left me. I even found I met the prisoners in my dreams. 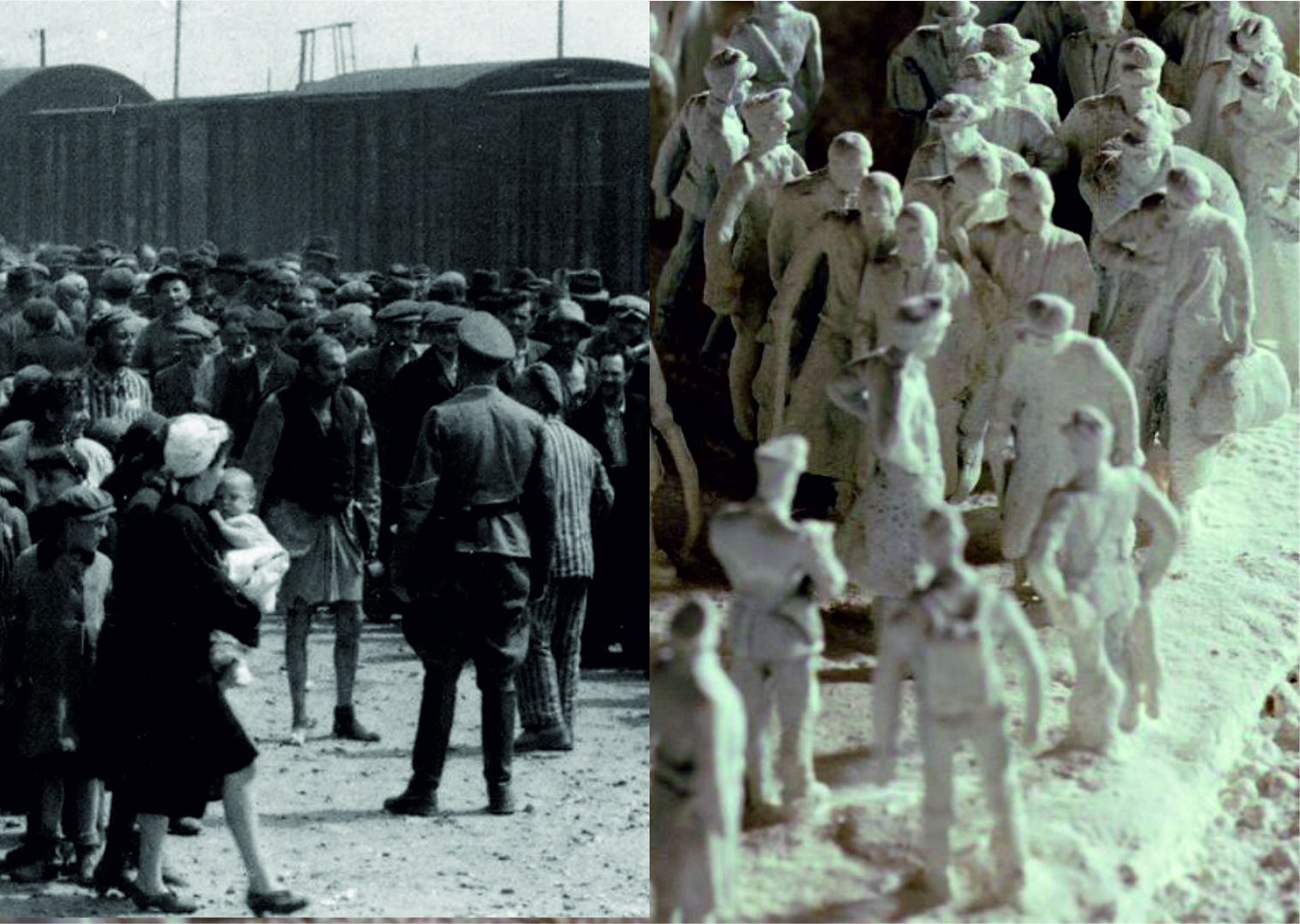 To create the 6,000 model people we needed, one of my colleagues sculpted about 350 different hero figures. The model figures were given clothes, bags, hats and weapons to match the figures in the pictures. They were then cast in a white metal lead alloy to produce the required amount. I also made model dogs, motorcycles, staff cars, bicycles, and huge numbers of suitcases and bundles of belongings, all of which we could see in the photos.

The most arduous task was the placing of the figures. We all underestimated the time that this would take. Each figure had a small spike extending from the foot and every one required a tiny hole drilled into the plaster surface of the model before being placed and glued. At first prospect this was a painstaking business, but we soon realised how much more care and attention the grouping of figures would take. Gerry’s eye was very much leading this aspect of the project and we struggled for hours with each composition of our prisoners and their guards to produce lifelike interactions. Frequently we attempted to place the figures precisely in the same poses as particular photographs in the Jacob album.

The final phase of the project was to paint the entire model in one uniform colour. We chose a muted grey to create a sense that the entire piece with its many thousands of components stood as one entity, almost as if it were carved from a single block. 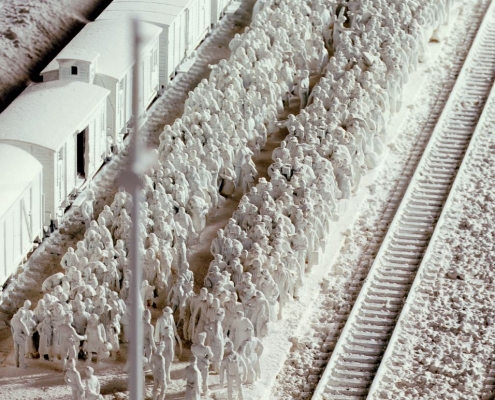 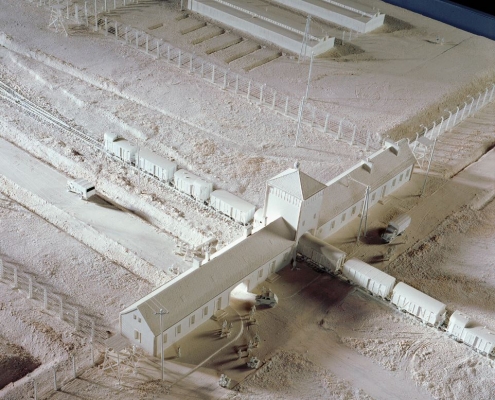 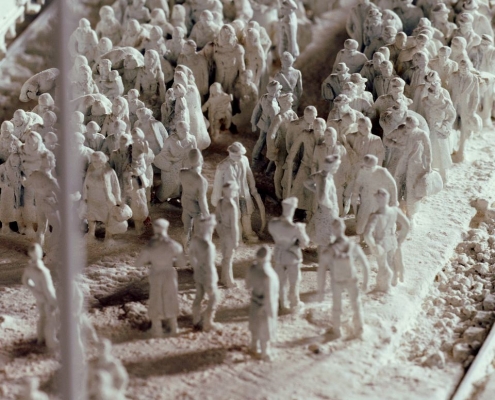 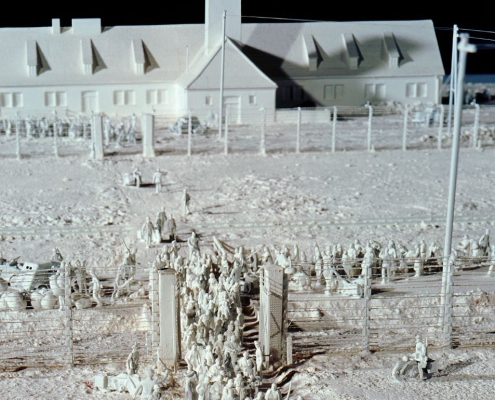